All about Japanese Ramen noodles with recipe

One of the most popular foods in Japan would be the Japanese Ramen. Japanese Ramen is a type of Japanese soup. It is made from a Chinese style of wheat noodles. The soup is generally a fish base or beef broth, and then is served with a variety of toppings such as sliced pork, beef, green onions or any number of others.

The noodles are made with wheat flour, water, salt and kensui. Kensui is an alkaline based water that contains sodium carbonate and potassium carbonate. Originally from China, Ramen has become a very popular dish since being adopted by the Japanese.

Noodles are naturally high in carbohydrates and calories, one needs to watch how many calories you are consuming to avoid the weight gain that is associated with any noodle dish. 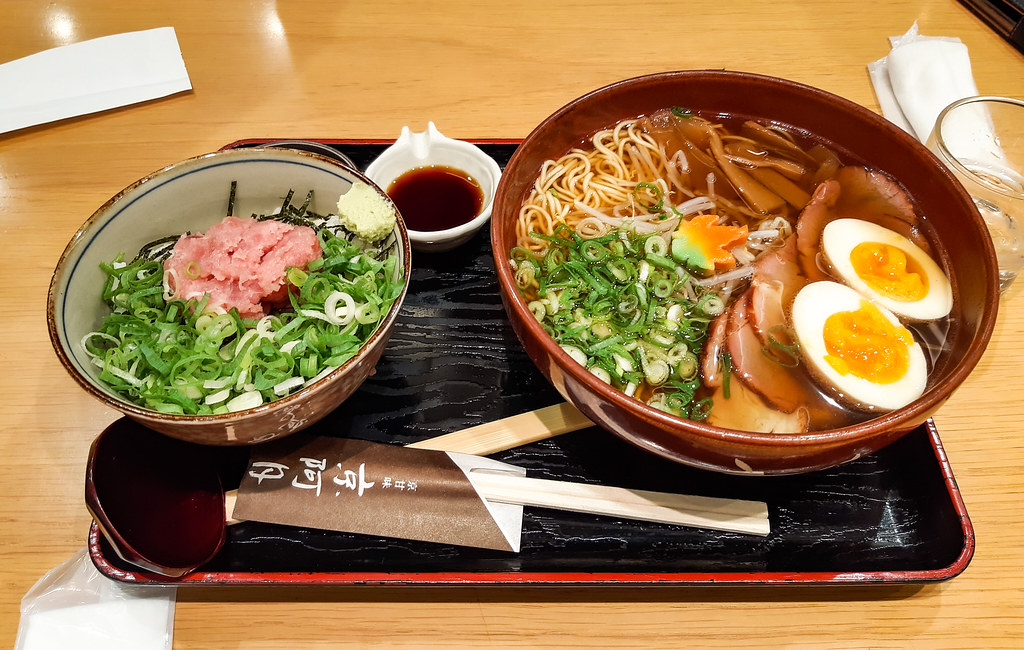 People can find Ramen noodles at virtually any supermarket or grocery store. They are made now to be a quick meal that is very economical. However, just because it is very economical, does not mean it has no flavor. Ramens come in many flavors. Beef, chicken, shrimp and pork to name a few. For many college students, this is the meal of choice because they have such a tight budget. The Ramens is sold in single packs, or multiple packs and cases.

Japan has only had Ramen for about 100 years. It has since become a staple in most homes, restaurants and even as a street food commodity. Street Stalls, or food booths sell a lot of ramen since it is such a quick meal to make. Families make it because they can make a complete meal out of it by combining virtually anything with the noodles.

Each cook has their own special touch or ingredient that they add to the ramen noodles to make them some of the best Japanese noodles in the country. It is not just a soup in Japan, it is a whole new experience. Restaurants are not decked out in fancy decor in Japan. The Japanese understand that the food should be the experience, not the place it is served. Since Japan is known for creative cooking, that fits perfectly in the scheme of life.

Ramen could be considered a minimalistic meal of sorts. Japanese are known for being minimalist, and it is no different when it comes to food. However, Ramen Soup is far from minimalistic in Japan. It is the base of life.

Ramen has become a staple around the world. There are many franchise noodle restaurants that the sole focus is on ramen noodles. Ramen is a simple dish that is extremely savory and delicious. Soup is generally considered to be a winter dish. One that warms a person from the inside out. Did you know that Noodle soup is a great way to hydrate? Noodle soup also helps to regulate body temperature.

There is no right or wrong way to eat Ramen noodles. You could actually say that anyway is the right way to eat. That may involve slurping, spilling and a lot of sucking it off the chopsticks. Spoons can also be used obviously. There are even those who just lift the bowl and drink from the bowl. So do not fear that you are being a messy eater, there is bound to be some spatter as you are slurping those delicious Ramen noodles.

Ramen soup can be simple or it can be extravagant. Either way, it is the food that matters. Some will say it is too complicated to make homemade Ramen Noodle Soup, but I have a recipe that will show you differently. Today’s Ramen noodles are a perfect combination of Chinese invention and Japanese creativity. There is likely not a single place that does not have ramen noodles available. Even though the Chinese created them first, the Japanese have essentially made Ramen all their own.

With this recipe, I have managed to create a Chicken Ramen very reminiscent of those made in authentic Japanese restaurants. It normally takes years to master a great Ramen noodle soup, so I am elated that this worked so well. This has a bevy of fresh vegetables, a flavorful broth, a soft boiled egg and some roasted chicken. You can get this onto your table in less than an hour. Of course, if you stop by the supermarket and buy some roasted chicken, your meal will be ready in even less time.

Salt and pepper to taste

For a more authentic taste, I have also included another recipe.

4 cups of chicken stock or broth

You can generally order Ramen by their Soup Base. There are many different varieties. Some of these include:

Shoyu, which is Soy Sauce

Tonkotsu, which means pork bone. Yes, bone. The bone is boiled down until it turns to a milky whitish paste.

The toppings vary widely also. Some of these include:

Moyashi, is raw or cooked bean sprouts, with a crunch to them

Tomago is a soft boiled egg. These are either set yolks or slightly runny yolks

Butter, a thick slab of butter is placed on the top of the soup and as it melts adds a creaminess to the soup.

Ramen is a meal in itself, but there are a couple of sides that are quite commonly served with Ramen. This would be pan fried dumplings, and there is often fried rice. There are some restaurants that offer a complete set up of the Ramen, gyoza and fried rice with drinks.

Japanese Ramen are so popular that there are vending machines where citizens can purchase a dish of Ramen to go. This is wonderful for those that do not have time to go to a restaurant and wait for a table, then order and then wait longer. It is obvious that Japanese cooking can be very quick, however, at times the vending machines are even quicker when you are in a hurry.

There are some varieties of Okonomiyaki that use cooked ramens in the cake that makes the meal.

Ramen does not have to be just for Japanese soup. There are many ways that Ramen can be included or used in other meals. Japanese noodles can be paired up with many other foods. Such as bacon and eggs, makes for a very tasty and filling meal. You could make up some beef and broccoli and pair it up with a bowl of Japanese noodles. Combine the Chinese with the Japanese. If you have some leftover ham, pair it up with kimchi and Ramen noodles. Try something completely different.

Make up two orders of noodles and form them into a circle shape. Place them in a skillet with some sesame oil and fry them slightly on both sides. Grill a burger and place it between the two noodle buns. The options and possibilities are truly endless. Virtually anything will taste even better when paired up with some Japanese noodles. Of course, eating them plain is just as good. Personally, I like mine drained, add a tsp of butter and then the dry soup mix. Something as simple as noodles, has a way of placing a smile on anyone’s face.

Every region in Japan has their own specialty when it comes to Ramen. Ramen are so important in Japan that there are even places and attractions related to Ramen. Museums are quite an interesting visit for tourists in Japan. There is even one museum dedicated to instant ramen noodles. In the United States I would guess that the majority of those who eat ramen, buy the instant version. I can not venture a guess whether that is because it is possibly too difficult to make, or is it because people have not attempted to make it. Other than that, I would assume that the majority of Japanese cuisine is eaten at Hibachi or Teppanyaki Restaurants.