Sushi rice is steamed rice that is flavored with vinegar based flavorings. Many think that making rice is not difficult. It isn’t, but you want to make it the right way so that when you are serving sushi or another Japanese dish, the rice comes out the way it is meant to. Sushi rice, with the vinegar based flavors, is only made when it is being used with Sushi.

Sushi is one of the main traditional Japanese cuisines that millions of people enjoy daily. Sushi is a dish that is made with vinegar rice, sugar, salt and accompanied with ingredients such as seafood and vegetables. The fish and the vegetables are usually served raw. There are many varieties of Sushi, just as there are many varieties of the presentation methods. The one ingredient that is common in all of them is Sushi Rice. Sushi Rice is also called Shari or Sumeshi.

Sushi Rice, made the correct way, is a truly fundamental part of Japanese cooking. Not just any rice can be used. Rice that is used for Sushi is a vinegared Rice. You do need to read labels closely. There are companies that will claim that their short grain rice is Japanese.  When you are planning to make Sushi, be sure to find Vinegared Japanese rice.

The next question would be, Why season the Japanese rice with vinegars? This is due to way back in time and the origin of sushi. The actual meaning of Sushi is, ‘Sour Flavor’. Throughout the past decades, fish was kept and stored by wrapping it in fermented rice. When the family was ready to eat that fish, the fermented rice was thrown out. Then came the 1300 and the 1500s. Instead of using fermented rice, the Japanese started adding vinegar to the rice instead. The vinegar added time to the shelf life of the rice. Another benefit is that the vinegar made the rice tastier as well, so they began eating the rice and the fish together, which turned into today’s Sushi.

Today and for the last 300 years or so, we have refrigeration. We do not need to wrap and store fish to prevent spoilage. However, the flavoring with vinegar remained and became popular.

When you want to make Sushi rice, be sure to only have short grain Japanese rice. Sushi rice is made with this type because the flavor and the consistency is very different compared to Basmati, long grain, or even Jasmine rice. Japanese rice has a higher moisture content, and the texture is different from what you find in other types. This moisture and texture is what makes it the perfect rice for Sushi, it is sticky. Japanese Rice provides for the authentic taste of Japanese Sushi.

To prepare the rice correctly certain procedures should be followed. To begin, the rice needs to be washed and rinsed a few times until the water comes out clear. This removes the starch. The rice should then be left to soak for at least 30 minutes, This gives it the texture we look for.

The utensils that you need are quite simple. You can cook the Sushi Rice on the stovetop, or you could use an electric rice cooker to do the job. Many of the rice cookers have an option for Sushi Rice. With this option, you know that your rice will come out perfect.

Set your seasonings out beforehand to ensure that you have all that you need. This will be Sushi vinegar, sugar and salt. An important suggestion, if you can locate Kombu, do so and add it to the rice also. The Kombu will deliver the perfect umami. Sushi vinegar is the one you need. If you do not have any and cannot locate any, you can make it yourself by mixing rice vinegar, sugar and salt.

How To Tell When The Rice Is Done

When Japanese rice is completely cooked, it will have a slight shine to it. Each grain is of itself, yet still sticky and a good bite. If the rice does not retain its shape, it has too much water, or there was too little water so the rice did not cook properly. That is all there is to Sushi Rice. 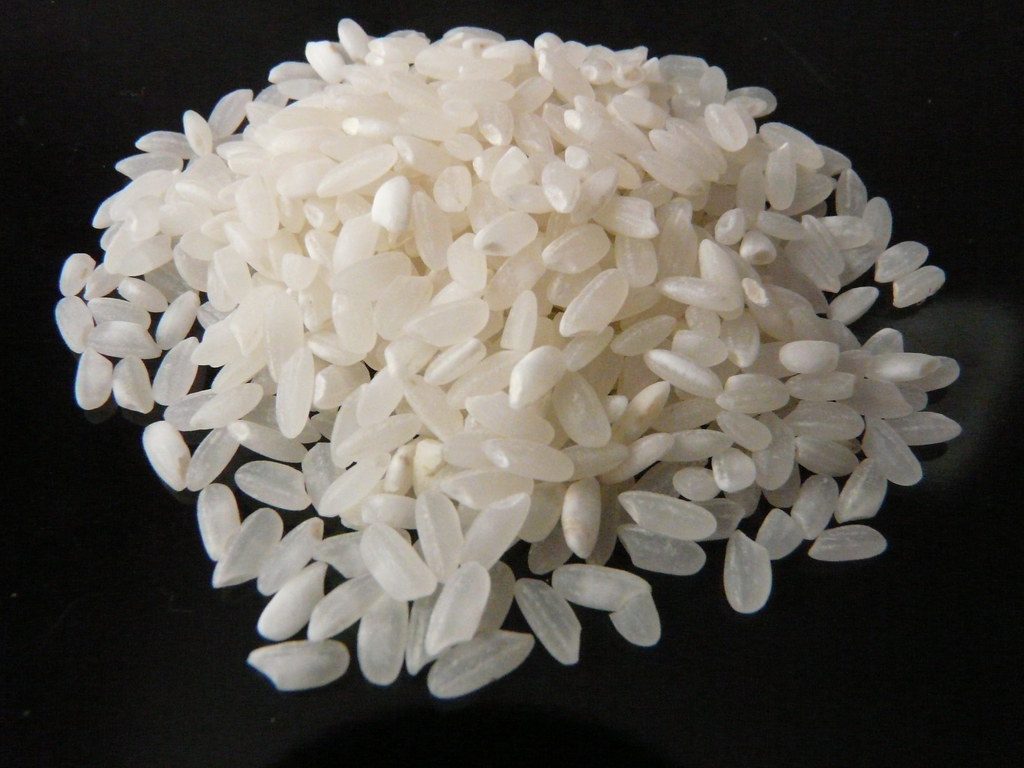 We in the United States are so used to using long grain rice for everything. Most of us probably do not know what good rice tastes like.  When you follow the instructions for the Sushi Rice, you will have the best tasting rice for any meal. It does not have to be just used for sushi. For that fact, using Japanese rice in Okonomiyaki gives it the flavor we crave.

Is Sushi and Sushi Rice Healthy? The condiments would be that adds the calories, these include Eel Sauce, teriyaki and all the other flavors.If you want to cut back on the calories, use less of the eel sauce and add in Avocado, quality fresh fish, you can use brown rice instead of white. Brown rice has more protein and fiber. I know, brown rice is not the same as short grain Japanese rice.

What makes Sushi a healthy food?

The seaweed that it is wrapped in has tons of nutrients in it.

Fish has a protein abundance, whether it is cooked or raw.

The vegetables contain loads of fiber, antioxidants and nutrients.

Rice has fiber and a main place in a balanced diet plan.

The condiments used can be healthy, Lemon and ginger are good for you.

What makes sushi unhealthy is when it is fried. That frying adds saturated fats. When the sauces are mixed with sugar, that will add to the caloric intake. The sodium content of soy sauce increases the sodium levels.

However, when eaten in moderation, such as with other foods. Sushi is a healthy meal. The negative comes with the adding of extras.

When comparing the different rices to use, keep in mind that Sushi rice is the short grained Japanese rice, others like Jasmine are long grained. Sushi rice when cooked properly is also stickier. It also contains more starch, which is why you need to rinse the rice quite a bit until the water runs clear. This eliminates how much starch is there.

If you are like me, you are probably still wondering how the Japanese can eat so much rice and stay so slender. That has been one of my main questions for as long as I can remember. First, let’s be real. Rice is the main source of carbohydrates for them. Whereas people in the United States tend to eat a much higher intake of carbohydrates. So eating rice is the way they get that energy to keep going.

The Japanese will normally eat rice for each meal throughout the day. Yes, even breakfast! For breakfast they will have miso, rice and eggs, fish and greens, along with the green tea.

Lunch will quite usually include rice with fish, and greens. Same as dinner. What we need to remember, here in the United States, is that there is a very low amount of Japanese that will eat junk food, or even make bread of any kind into such a big portion of their meals. They also prefer all foods that are in season. They do not choose canned fish, canned vegetables or canned fruits. They use entirely fresh foods at each meal. The main ingredient being fish or vegetables along with the rice.

Another issue that the United States people have is that we tend to fry foods. We add grease, oil or some other form of fat to cook our foods in. This is much different than  the Japanese. They will steam, boil, grill or stew the majority of their foods. Many others are eaten raw. Do not get me wrong, they do fry, but will use the bare minimum of oil for frying.

It is highly believed that rice was first introduced to Japan around 10,000 years ago. The rice was brought to Japan from Asia or China. The earliest record of any rice being cultivated is stated to be around 400 BC. This led to many of the hunters and gatherers to become rice farmers. The Itazuke site is where archaeologists discovered proof of rice paddies, storage areas for rice and irrigation ditches.

Cultivation is a community affair, neighbors work together to cultivate the highest harvest possible.  This continues the mindset that began so long ago and still shines in the Japanese.

In time, rice became the sign of wealth in Japan. If a person had rice, they had some semblance of control.

The 7th century saw taxes paid to the leaders in the form of rice, even salaries for some people would be paid in rice. As is often the case, the wealthiest would end up with more than what they would need for a year, while the peasants and farmers were forced to pay until they were broke, literally. Rice was also used as currency for a time. Many folks in Japan did have more than they could actually use, so they would exchange it for cash or other goods. Somewhat like a barter system. This did ultimately take Japan from wages paid with Rice, to the modern day banking systems. In Osaka, there would be what has become known as auctions and bidding to obtain rice to feed the poorer districts.

Then came the Dojima Rice exchange in 1697. With advancements made continually throughout the time since until we arrived at the first future’s trading in the rice market. The Government Rice agency took over in 1939.

Not until 1912 and the industrialization of rice processing, did those lower than the upper class have access to the white rice. Today, rice cultivation in Japan is heavily subsidized by the Government. The consumption of rice has never returned to what it was before the era of World War II. Today, other countries such as the United States rely on Japan to ship rice products overseas. Even today, the Japanese locals prefer to have the domesticated rice even if it costs them more than the rice that they can get cheaper that is shipped in from China and Australia.

Sticky rice will continue to be a much needed product for Japanese cooking, and for those of use that prefer the sticky rice that comes from Japan. The unique sticky is what makes the best Sushi. Japanese rice is known to be more glutinous, has a rich taste and is not dry. That is what makes Japanese Sticky Rice so good and remains so popular. Japanese rice is not only a shorter grain, but it is also translucent. There is not as much starch when it has been washed well. There are many in Japan who do not eat Japanese Rice. They are more health conscious and choose to eat brown rice.  Brown rice is still lower in starch than white rice, it can be used for Sushi, but it will not be the same as the Japanese sticky rice.